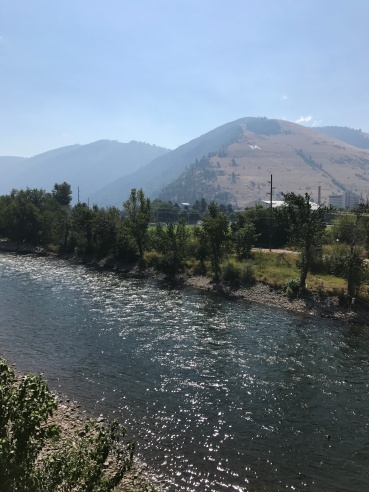 My feet are tired but it has been a great day in Missoula. This is a town of bicyclers and walkers, and the city makes sure there are plenty of greenways and paths to use. One of those “trails” started right behind our motel. Walking along this trail took us over the Rattlesnake Creek. In spite of its name it is lovely with  river rocks of many colors shining through the shallow water. This creek runs into the Clark Fork River running east and west through the city. Missoula is laid out on the north and south sides of this river which is actually the Clark Fork of the Colombia River. After walking south over the river we turned west to walk in a residential district which runs parallel to the river. One thing we have noticed about cities in the west is that the streets are wide and accommodate two lane traffic, bicycles and side street parking. Spacious streets, trees and wonderful older houses have been the mark of most of the downtown areas we have seen and Missoula was no different. We approached Higgins Ave. which also crosses the river only to find that Caras Park, where the Farmer’s Market is was on the north side of the river, so we crossed again and this time found lots of activity. Caras Park and McCormick Park were both bustling with action. 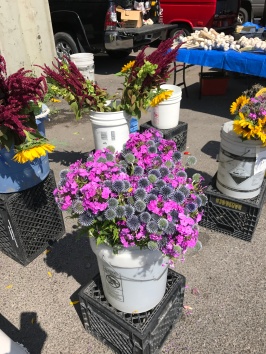 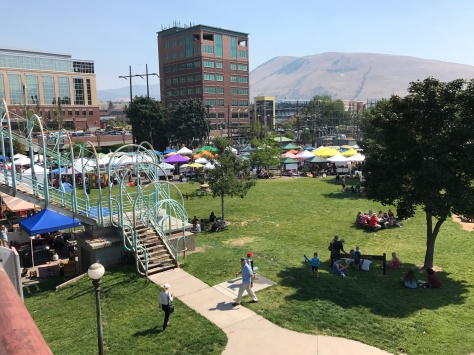 In Caras Park we found the Saturday morning farmer’s market. Beautiful vegetables: golden and red beets, chard, rhubarb, kale, lettuces, onions, and all  kinds of betties including the wonderful Montana huckleberries. There were cheeses of all sorts, sellers of bison, pork and beef. There were prepared foods: jellies and jams, herbs for everything from cooking to curing, fresh squeezed lemonade, tamales and many other things that I didn’t get a chance to see. It was a feast for the eyes.

From Caras Park we moved on to McCormick Park where there was a Celtic Festival going on. When we got there the bagpipes were playing and it was hard to hear or think about anything else. It reminded me of times when bagpipes were to be played at funerals I have done. Only in the really big churches like the Cathedral in Albuquerque could they be played indoors. Overwhelming in small spaces they are perfect for outdoors, Here’s a sample of their music:

Wandering the various stalls set up at the Celtic Festival we found sellers of kilts, colorful scarves, beautiful jewelry, crystals and stones. Persons of all ages were there, many with their dogs. Time seemed to melt away as we sat watching young men and women dancing to traditional Irish dances. Fiddle and guitar music sounded a lot like our Blue Ridge Mountain bluegrass and the dancing so much like clogging. Our mountains have deep roots in the Scots Irish tradition  Montana’s demographics show that Irish is the second largest European ancestry group in the state. (2010 census). There are two large Roman Catholic high schools in Montana, one in Missoula and one in Helena. We noticed that along with the large M (for the University of Montana) on the hillside over Missoula there was also a smaller L on another hill. It stands for Loyola High School which is a part of the Missoula Catholic School system associated with the Roman Catholic Diocese of Helena.

Sitting in the shade of an evergreen tree at McCormick Park  we listened to the music and watched the young dancers. Watching the people coming and going in the park was perhaps our greatest treat. Children, ever the great entertainers, gave us our greatest fun. One little girl of 6 or7 had been tethered to her little brother of about 2. She dragged him down one hill and up the steps behind us. We wondered at what point he would need therapy! Another little boy had obviously dressed himself (we hoped). He had a lime green shirt with a black and green bow tie and black and lime green shoes.  There was a man on a bicycle pulling a small trailer with a small, older dog comfortably riding along. 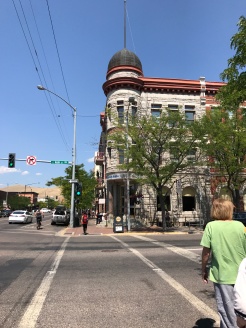 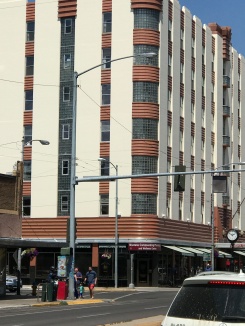 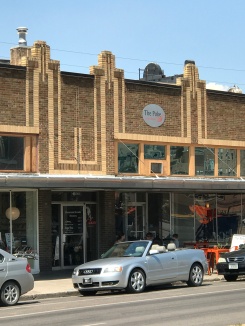 We finally pulled ourselves away from the festivities and began walking back to the motel. Strolling through the main downtown area looking at the older buildings and their beautiful architecture and stopping at an old fashioned diner for some late lunch. The music in the diner was from the late 50’s and early 60’s. After Pat and I thoroughly embarrassed Debbie by singing along to ALL the songs we paid our bill and left. 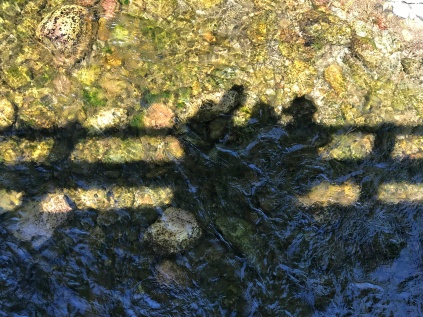 Shadow Selfie at the Rattlesnake Creek

It was a fun day in Missoula!!

One thought on “Missoula 2”