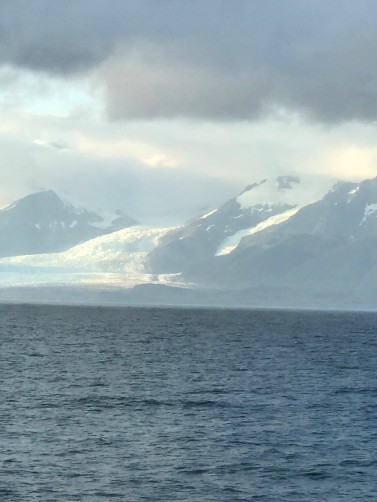 Rain has plagued us as we have made our way north on the Kennicott. Arriving early in Juneau yesterday we woke up to cloud covered mountains and misty wetness. The Kennicott was taking on fuel at this stop and it  was a longer than usual time at port. Many passengers, including some of our group, left the ship to visit Juneau. They visited the Sealaska Heritage Museum  and came back with lots of information about the indigenous people of Alaska,  There are many tribes and clans of the Alaskan aboriginal people: the Athabascan, the Tlingit and Haida, The Alutiiq and Unangan, who are more commonly referred to as Aleut; and the Tsimshian who migrated to Alaska in 1887. Each group has distinctive differences such as language and cultural, but they do share significant similarities.

The exhibit at the Sealaska Heritage Museum was called Alaska Native Masks Art & Ceremony. The group that went to Juneau brought back information about the masks on exhibit. “The masks are used in ceremonies and in dances to evoke, appease and influence the spirits they depict. ‘The masks have a life unto themselves. When you are in their presence, you are linked to the spiritual world in ways that can’t be explained.'” – Perry Eaton, Alutiiq artist. (Alaska Native Masks Art and Ceremony, Sealaska Heritage Information Booklet) Many of the masks, as noted above, are spiritual in nature and used ceremonially, but  there are also masks which are used in theatrical performances. Used to represent a historical event or to tell a mythological story, the art they represent is an important part of the creative expression of the indigenous people. The Spirit masks and Shamanic masks used in sacred ceremonies are felt to have a power of their own. Many masks are created as art and sold to Native and non-Native alike, but there is a continuing tradition that sees certain masks having great spiritual power. These masks are links to the power of Great Spirit who heals and restores humanity. 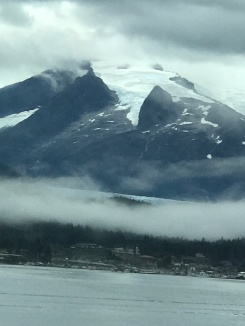 Leaving port in Juneau we were able to see the Mendenhall Glacier and other glaciers on the slopes nearby. Glacier Bay National Park. Mt. Fairweather at 15,300 feet was visible off and on as the clouds allowed. Glaciers store about 75 per cent of the world’s fresh water supply. Often, especially when the glacier becomes very dense and compacted, they appear blue. This compression of the ice forces out the tiny pockets of air in the crystals. This “dense ice” absorbs a small amount of red light, leaving a bluish tint in the reflected light that we see. Glacial blue is another one of those colors that you can’t find in the crayon box! It seems to be many blues at once – sometimes teal in tint and sometimes the delicate blue of the an evening sky. Glaciers are composed of snow that has fallen over many years so that it becomes a mass of ice which moves. Because of the sheer weight of its mass it moves like a very slow river. Sometimes they push or carry rocky or other debris with them called moraine. A glacier is “alive” as long as it has the mass to move.

One of the lounges on the ferry; a view from the ferry

Today we docked in Whittier, AK at 6 am and began our land journey in Alaska. The ferry has been a great home in every way over these days, but it was good to get back onto land. Thank you Alaska Marine Highway for being a great ride with wonderful employees! Our land transportation vehicle has changed a bit since we left home. The Hardee’s Subaru Outback collected some stickers on the journey. It’s usually pristine tailgate is now a record of our memories! 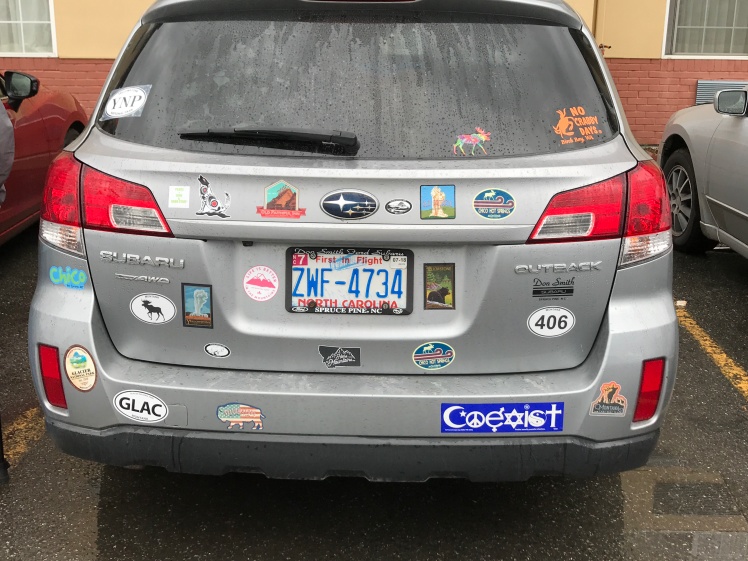 * One correction from the last blog. I misidentified the Totem village we visited as Totem Bright – it is Totem Bight.