Being in this land of lakes, rivers, seas and mountains means that time outdoors is spent in one of those venues. Walking on the beach watching otters floating on their backs and seeing snow covered mountains in the background; then taking time to look for moose or caribou around the lakes and marshes – all of this is a part of amazing Alaska!  Driving south along the Kenai Peninsula today we watched as the waters of the Cook Inlet grew wider. The confluence of the Kenai River with the water of Cook Inlet is just one of the places where ice blue glacial river water swells the Inlet. The Knik Arm and Kasilof River add glacial water from Denali and the Kenai Mountains to the Inlet which flows into the Gulf of Alaska at Homer where it is around 12 miles wide  Two thirds of Alaska’s population surround the Cook Inlet which is 180 miles long from Anchorage to Homer. Most people live in the Anchorage area and in communities along the Kenai Peninsula rather than the more remote west side of the Inlet.

The Cook Inlet is named for Captain James Cook who visited and explored the Inlet in 1778 as a part of the search for the Northwest Passage. Two parties searched the Inlet at different times both thinking that the Knik Arm might lead to the Northwest Passage. When the second party found that the Knik was only a river they too had to turn around and sail out. The upper part of the Inlet around Anchorage was appropriately named Turnagain Arm for these attempts. The early explorers of the inlet were the Dena’ina, the first people of Alaska. In the 18th century Russian fur traders settled in regions along the inlet. In Ninilchik today we stopped to see the Church of the Transfiguration of Our Lord built in 1901. Its picturesque setting on a high bluff above the Inlet with the original site of the old village  below connected by steep paths along the bluff seemed surreal in this Alaskan landscape. The cemetery was distinctive with white Orthodox crosses dotted along overgrown graves; flowers growing among the weeds like distant memories trying to surface. 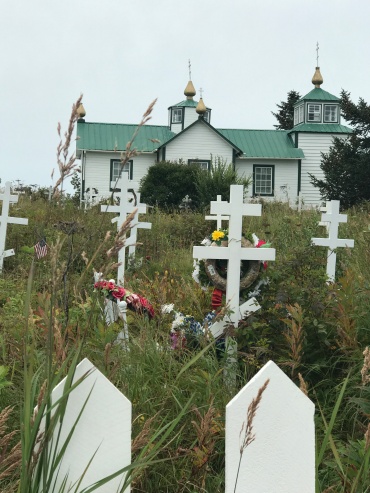 In Homer we are staying on The Homer Spit, a 4.5 mile long piece of land that juts out into the Kachemak Bay. Land’s End is the name of the place we are staying, an apt name for this little bit of land surrounded by water. Ferries, barges, fishing boats, water taxies, and even a cruise ship have entertained along with the sea otters on this rainy afternoon.

The Cook Inlet contains large oil and gas deposits including several off shore fields. Platforms dot the inlet as well as oil and gas pipelines running under and around the inlet. Most of these gas lines go to Kenai where there is a large LNG plant and to Anchorage where it is used domestically. These “platforms” are “reality checks” amid the enormous beauty of the Alaskan landscape.

Today we saw three of the four volcanoes on the more remote western side of the Cook Inlet: Spurr Mountain at 11,070 feet, Redoubt Mountain at 10,197 feet and Illamna Mountain at 10,016 feet. Sun was shining directly on Spurr this morning when we took a drive down to the beach at Nikiski to see the oil platform. Then as we started to Homer the sun came out over Redoubt for just a few minutes and finally over Illamna which stayed visible until we got into the rain further south.

Yesterday I came up with a few little things to remember to the tune of Twelve Days of Christmas. I don’t have 12 things (yet) but I do have 5 days worth.  So here goes: 5 Kinds of Salmon: which you can remember by looking at the fingers of your hand. The thumb is Chum or Dog Salmon, the pointer finger is Sockeye or Red Salmon, the next finger – the tallest is King or Chinook Salmon, the ring finger is Silver or Coho Salmon and the little finger is Pink or Humpy Salmon: 5 kinds of Salmon! 4 Volcanoes: Spurr, Redoubt, Illamna, and Augustine. 3 Other Fish: Halibut, Rockfish and Trout. 2 Native Flowers: Forget-me-not (State Flower) and Fireweed; and 1 State Bird: The Ptarmigan.